You won’t have to worry about this being a long history book. But it will be a slightly longer post than most.

You won’t have to go on an archaeological dig to find any ancient remnants.

In fact, the origin of employee recognition is relatively new.

Which is why it is not always well understood or properly utilized.

Having an understanding of recognition’s not so distant past will help you better appreciate the quandaries and challenges you face in your role.

Rewards and recognition…it’s kind of like the chicken or egg theory. Which came first – rewards or recognition?

Work arrangements anciently were conducted in a bartered manner of goods and services for items like food and clothing and lodging.

And rewards truly were the all mighty dollar way back when (or the Roman coin known as an “as” or lots of coins…assarius).

In ancient Greece you had the Olympic games and the prize of winning the laurel leaf crown.

The name “laurel” is said to be connected with the Latin word “laus”, meaning “praise”, but the origin is truly Greek.

An Olympic victor was crowned with an olive or laurel wreath and had his name inscribed in the official Olympic records.

Olympic Champions became heroes in the eyes of the people, and conferred great honour upon their home cities, which, in gratitude, would often feed them for the rest of their lives although they were never paid.

Note the symbolism of the wreath on athletes’ heads. This was the greatest reward AND recognition and far superior to the food.

There have been arguments purporting that one or the other, Rewards or Recognition, is more effective than the other. Let’s take a closer look and see what you think.

Now I am going to take you along few tracks that in the end converge to show my perspective on the origins of rewards and recognition.

Let’s start first with the Employee Track. Many recognition awards stem from our military history in giving soldiers medals.

It is reported that when Napoleon Bonaparte was captured on July 15th, 1815 – that as he boarded the ship HMS Bellerophon, he told Captain Frederick Lewis Maitland of the British fleet, “A soldier will fight long and hard for a bit of colored ribbon.“ 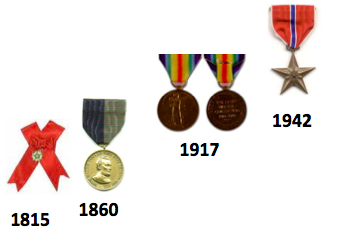 The first recognized medals of the U.S. Army were during the American Civil War and were generally issued by local commanders but on an unofficial basis. The Medal of Honor was the first award to be established in regulations as a permanent Army decoration, complete with benefits. Here we see an award accompanied by a reward.

With World War I came the Victory Medal with a confusing array of battle clasps to denote combat participation.

Then in the 1920s and 30s, the U.S. Army issued very few decorations and it was common for a service member to spend an entire career without receiving a single medal. With the outbreak of World War II, the Army began the largest expansion of medals since the Spanish-American War as well as the first wide scale issuance of inter-service awards.

In addition, several World War II campaign medals created along with the World War II medal for various theaters. And a World War II Victory Medal was established at the end of the conflict as well as an occupation medal. Medals were a big deal!!

During the 1950s and 1960s, the Army expanded both its number of medals and ribbons, as well as having its service members eligible for several new inter-service campaign and service medals.

Further along the timeline the term incentive pay was recorded for the first time in economic literature in 1943.

Following World War II, companies such as jewelers and makers of medals used the same techniques of their craft to make emblematic jewelry as well as awards, trophies, and plaques. 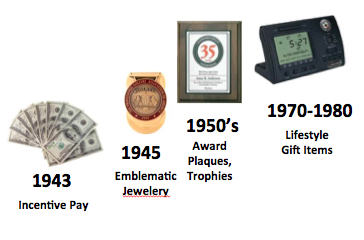 During the 70’s and 80’s employees demanded more choice and requested various lifestyle and electronic gift items which changed the whole direction of rewards and recognition programs.

With the emergence of the Internet, reward and recognition providers were able to utilize technology systems to integrate with Human Resource Information Systems.

The development of Web 2.0 allowed users to interact and collaborate with each other in social media dialogue as creators of user-generated content in a virtual community.  This contrasts with websites where users are limited to the passive viewing of content that was then created for them.

“Web 2.0“ is commonly associated with web applications that facilitate interactive information sharing, inter-operability, user-centered design, and collaboration on the World Wide Web. This was different from regular websites where users are limited to passive viewing of content created for them.

Also, Social Media is continually pushing the edge of how people want to be “liked”, valued and appreciated.

Watch Out For the Consumer Track

And don’t forget the Consumer Track, which we’ll quickly see, has a definite impact on employee rewards and recognition.

This track starts off with picture cards back in the late 19th century with B. T. Babbitt soap.

In the early 1900’s, right up to the 1980’s, the Sperry and Hutchinson company issued Green Shield Stamps. Consumers would earn these stamps received at supermarkets, discount stores and gas stations and saved them up and redeemed them for items from a reward catalog. 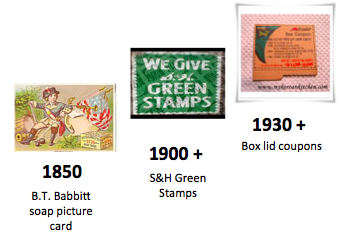 How many remember collecting box top coupons for different products and gifts?

General Mills’ Betty Crocker cake mixes claimed to be the first company to do this and the different point values could be redeemed for various house wares from a catalog. Often the amount of products purchased for these box top coupons essentially paid for the bonus product or prize.

Canadian Tire ‘Money’™ was inspired by Muriel Billes, the wife of Canadian Tire’s co-founder and first president, A.J. Billes. This was introduced as a “cash bonus coupon” in 1958 in the first Canadian Tire Gas Bar in Toronto.

Technology made it possible for these accumulated points to be automatically added to what became known as Loyalty Cards. Loyalty cards worked for consumers in tracking purchases, providing discounts, and eventually accumulating points of value for a customer’s loyalty. These could then be redeemed for various gift items

Are you starting to see how all of this is coming together to inspire the rewards and recognition products and services for employees and the origin of our industry as a whole? That’s just the Employee and Consumer Track.

One more track to consider in this whole evolution of rewards and recognition is the Scientific Track. Then we can understand how social science has also contributed to and complicated our industry.

Ivan Pavlov, (I am sure his name rings a bell!) back in the late 19th century experimented with dogs and generated a conditioned reflex with food along with the ringing of a bell that generated the salivation in a dog.

By 1911 Frederick Taylor was experimenting with time studies and a method called scientific management and often referred to as “Taylorism”. Taylor’s own names for his approach included “shop management” and “process management”.

He would experiment with different designs of work tools, conduct observation and time studies and make good quality changes. It was his writings on incentive schemes that created the piece rate pay method in production and shop management. He is famous for his book on “The Principles of Scientific Management”. 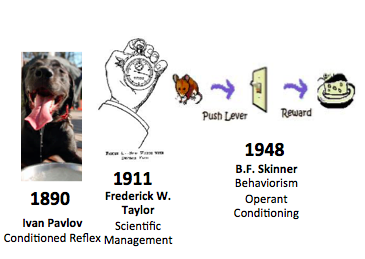 Most of us are well familiar with B.F. Skinner’s operant conditioning theories. His theory is based upon the idea that learning is a function of change in overt behavior. Changes in behavior are the result of an individual’s response to events (stimuli) that occur in the environment. A response produces a consequence such as defining a word, hitting a ball, or solving a math problem.

When a particular Stimulus-Response (S-R) pattern is reinforced or rewarded, the individual is conditioned to respond.

Reinforcement is the key element in Skinner’s S-R theory.

A reinforcer is considered as anything that strengthens the desired response. It could be verbal praise, a good grade or a feeling of increased accomplishment or satisfaction. The theory also covers negative reinforcers — any stimulus that results in the increased frequency of a response when it is withdrawn (different from adversive stimuli — punishment — which results in reduced responses). A great deal of attention was given to schedules of reinforcement (e.g. interval versus ratio) and their effects on establishing and maintaining behavior.

1943 was a long time ago when Abraham Maslow created his classic Hierarchy of Needs. Any Psychology course would be remiss without showing this classic model. Many other motivation theories have been espoused since this time. 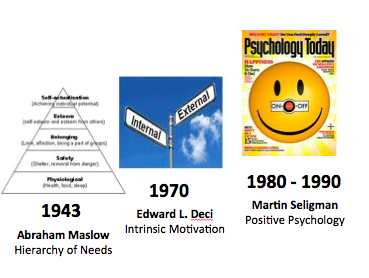 And as the 80’s and 90’s came along some impressive research was presented that drove the Positive Psychology movement such as Martin Seligman’s work.

Even Our Industry Associations Tell Us Something

So we’ve taken a look at the Employee, Consumer and even the Scientific Track.

But what about some of our industry associations? When did they come onto the scene?

In all the tracks I have taken you along, you will see how each one began with rewards and ended, always in the most recent of times, with the development of recognition.

Wherever you are working and whatever your role is with employee recognition, you are making history with what you are doing.

Question: What historical elements do you think contributed towards employee recognition?

2 thoughts on “A Short History of the Origins of Recognition”