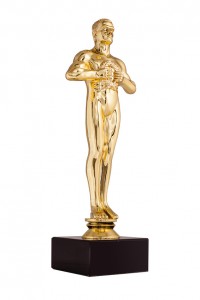 It is a surreal, exhilarating and giggly experience for actors, directors, producers and other movie contributors when they are nominated for an Oscar.

Brie Larson who starred in the movie “Room”, told Good Morning America, “The nominations mean so much because it comes from your peers, it comes from fellow actors. I was home-schooled and I never really felt like I was part of any group. To be included with people that I respected so much since I was a kid is just absolutely incredible.”

“Brooklyn” star Saoirse Ronan also spoke with Good Morning America, and said, “I was asleep and my mom ran in and she was crying and so it was either good news or bad news and it was great news. I’m going to start crying now, but to get Best Actress and to get Best Picture means the absolute world to us.”

But getting nominated is just the beginning. To actually get on the nominee list is a huge, labor intensive process I never fully appreciated in all the years I have been around to watch the Oscars, now in their 88th year.

Thanks to author and journalist John Young from Entertainment Weekly I got the low down on how the whole nomination process works. It’s an intricate and long process.

The almost 6,000 by-invitation-only members of the Academy of Motion Picture Arts and Sciences get a chance to vote based upon the one of 17 branches of the academy they each belong to – so directing branch members are entitled to vote for directors and acting branch members vote for actors, etc.

The members of each branch are allowed to vote for the all award categories within their branch area. That means only actors vote for best and supporting role actors. And all members have the opportunity of voting for the Best Picture.

Each voter lists up to 5 names of individuals from their branch category and ranks them in order of preference. This is what takes the PricewaterhouseCoopers’ accountants the seven days to manually tabulate the results.

The member ballots are then put in piles according to their first-place selection.

A “magic number” is calculated and when any potential nominees reach that number they are automatically an Oscar nominee. The magic number is determined by taking the total number of ballots received in a particular category, and then dividing it by the number of possible nominees, plus one.

And the nominees for Best Actress Award are…

Using the Best Actress example, there are five nominees selected. If a total of 600 ballots were received you would divide that by six (five potential nominees plus one) to generate the magic number of 100 nominations. Any nominee receiving 100 nominations or more is in the running to be an award winner.

As first choice votes are finalized the actress with the fewest first-place votes is eliminated and their ballots are redistributed to the other piles based on second-place selections. The magic number drops at each round as ballots are voided from the previous rounds.

The process continues as potential candidates are eliminated and ballots are redistributed until five nominees reach the most current magic number or until 5 nominees are left on the slate.

Once the nominee list for each award category is determined then the entire academy gets to make one vote for each category award.

What can seem like a bureaucratic system at first becomes this amazing method for validation of your work and role in the film industry.

We can all learn a powerful lesson from the Academy of Motion Picture Arts and Sciences in capturing the power of being nominated.

Q: How well do you communicate the power and meaning behind being actually nominated for an award?