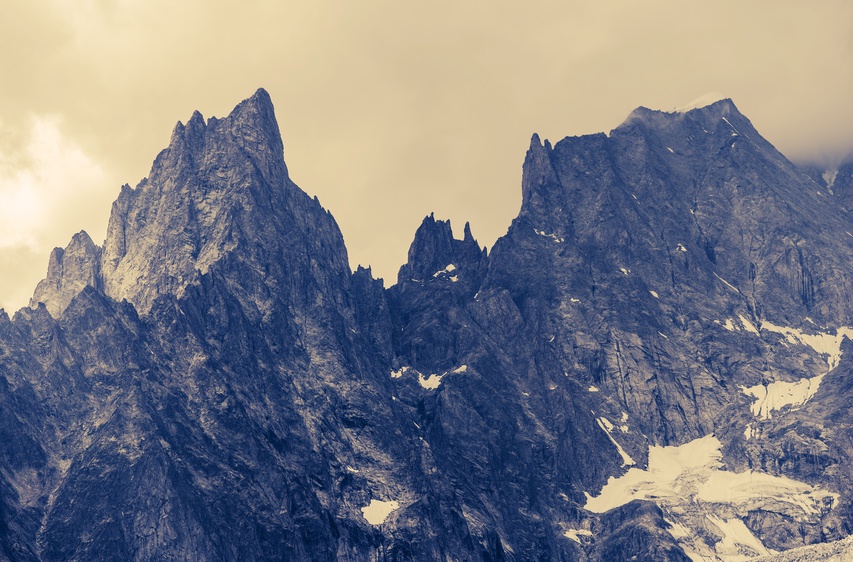 A colleague at work described an interesting situation to me about a company fixated on awards.

It seemed the person responsible for purchasing awards and managing recognition was only looking at and talking about tangible goods.

They were looking at merchandise and all the different formats for awards, crystal, plaques, paintings, and sculptures – you name it, Rideau can provide exactly what they wanted.

But do you really start with awards?

We can learn a lot from ancient civilizations in order to explain to senior leadership why few people are using your formal awards program or there is a general lack of interest in it.

Like any building project whether it is a house, pyramids, or formal awards programs, you must start with a good foundation.

But first, let’s quickly examine where most of our recognition programs originated from to best understand the foundation we need.

Historically many leading, long-term organizations were formed after World War II and often used a militaristic model of leadership. This mindset impacted recognition to be focused on giving “medals” and so the industry sparked the idea that recognition always equals awards.

Today, many organizations still tend to focus on formal awards as the starting point for recognition giving.

Long-term service awards are often the foundation of recognition giving, mirroring the medals concept of the armed forces. More organizations are also using performance awards for “above and beyond” actions and other measured outcomes such as sales and safety.

What should the foundation of recognition be built upon?

First one to the top of the pyramid

There is an incredible feeling in trying to get to the top of any mountain or the peak of one’s profession.

Similarly, formal awards have always been at the top of the pyramid when it comes to employee recognition.

Because so few manage to get to the top of a mountain it makes sense only a small percentage of workplace employees ever receive an earned or nominated formal award as well.

Typically, about 10 percent of the workforce receives a long-term or career milestone award in a given year.

As for the best-of-the-best nominated or performance merited awards, I have seen this category as low as less than 1 percent.

Are you seeing the same problem I am?

What goes up must come down

Not many employees receive formal awards.

Starting at the top is not the best place to begin a recognition infrastructure.

You don’t start building a house from the roof down and historians would not have been praising the Egyptians so much if they’d begun pyramid building at the apex.

When you start at the top of the recognition pyramid you are starting with the icing on the cake not the cake itself.

When so few receive any formal awards can you understand why some employees balk the process when the formal awards are the only recognition action in town?

Yet most companies allocate the most amounts of time, money and human resources, towards formal recognition than any other type, or level, of recognition programs and practices.

If you start at the top you are going to fail with recognition.

Far too few employees benefit from formal awards alone. It’s just not the foundation you need to build a successful recognition program upon.

The secret to successful pyramid building or recognition program strategy building is to start with essential building blocks at the foundation level. After this foundation is laid you can build everything else you need, one piece at a time. 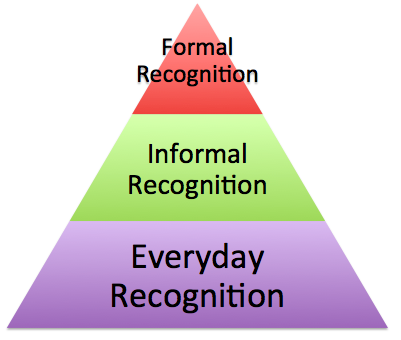 Now I know many managers and leaders are not going to like this. You can see from my inset diagram that the foundation to your recognition pyramid is actually Everyday Recognition. “But this is a ‘soft’ foundation,” you exclaim! “The pyramid will fall.” Au contraire. It’s a rock!

In fact formal awards will only blossom. When employees receive Everyday Recognition and feel respected and valued they can then acknowledge there are peers who merit receiving formal awards. Everyone feels recognized.

Let me put some comparative numbers on this for you. From the research I have conducted 62 per cent of employees had received verbal praise in the last seven days, and another 42 per cent had received a written acknowledgement in the last month.

You do the math. That’s a lot more people feeling recognized than those formally awarded.

When you build on a foundation of Everyday Recognition you add meaning and value to wanting to be formally recognized.

Employees will be singing the praises of your formal awards program all the way to the top of the pyramid, when you build it the right way.

It worked for the Egyptians. Make it work for you.

Question: Where do you tend to get stuck with your formal awards programs?